While most of you know me as the voice behind the Kids Formal blog, I am also a wife and mother and I struggle with many of the same issues all of you do too. As a mother of two boys, one of whom is 5 and full of energy, one of my constant struggles is with patience. It’s incredibly hard for me wait on my son to do the things I ask of him. 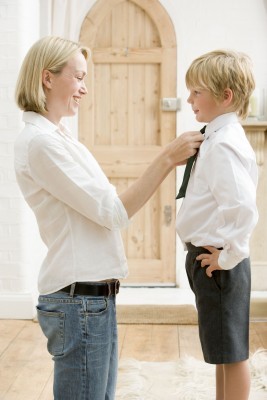 The kid is a great kid and will do what he is asked, but sometimes I may have to remind him four or five times or he may be in the process but gets sidetracked along the way. My natural instinct is to rush in and just do it for him because then I can go on about my day and stay on schedule. However, that doesn’t teach my son anything about responsibility. While every day brings on a new challenge, right now the reoccurring challenge with my little man is getting dressed.

I’m not sure if it’s because this isn’t something that I never considered a big deal or if it’s because I’m 30 and have two kids, but I honestly don’t remember how I was taught to get dressed. As I’ve already said, my son is 5 now. He will be in Kindergarten next year, but still hasn’t mastered the art of getting dressed yet. I may be trying to rush it just a little, but since I can’t remember how long it took me to master this art and he is my firstborn, I’m having a hard time being patient while he learns.

Maybe this isn’t the best way to go about doing it, but here are the strategies I’m using to help him learn how to dress himself.

I do have to say that the one area where I still dress him (and probably will for years to come) is getting ready for church and other formal events. While I admit that my patience is wearing thin right now, I do know that this is just a stage and that my son will have the art of getting dressed down in no time, but man, am I ready for this phase to be done!

What about you, do you have any tips for how to help the little ones learn how to get dressed on their own? Or, any advice for your fellow parents about how to embrace this stage and remain patient?